The 4th has proven to be the hardest holiday yet for all of us.

Nicholas woke up in a foul mood.. only wanting mommy and he has stayed that way until right now.. up from his nap playing with Daddy while I write.

Driving to my brothers house I was already back and forth in tears.. The moment we parked “A thousand years“came on the radio.. and in that moment I came undone.

Tony wanted too also.. but he felt like he needed to be the strong one for me. That ended up with him having some high frustration. On the drive home we talked a lot about that snapshot in time of our day.. Trading off weak moments used to be an unwritten rule for us. But now its not. Now we have to be able to function during our weak times… and we can each lean in .. support and be supported. Harder than it sounds… a work in progress for us.

The strength in which sorrow has hit both of is surprising .. and scary .. Because we know we have some major holidays to hurdle coming…But we have to let it out.. because no matter what.. days like today it is going to come out. In sadness or anger. ..Neither a desired emotion to be expending in public. I know its easier for Tony.. for all men I am sure… to go the ragey place.. I think if it worked and really helped him we might even be ok with it..but most of the time it just doesn’t and the pain underneath needs to be released.

It is so hard to see my husband cry. To know the depths of his despair and that there isn’t a damn thing I can do about it.

I do think it was good that we went through this today.. so we could talk and prepare.. and do our best to rewrite 10+yrs of habit in our relationship. 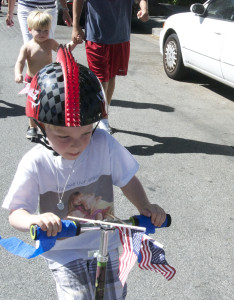 Before Jonathan got out of the car he asked if I needed a hug.. I did. And I told him to have a ton of fun today. He did. We walked in the parade… its a mile or so long and all the kids that want to can be in it.. walking and riding bikes. He had his scooter. He worked so hard at it. A misunderstanding happened at one point and he got his feelings hurt.. not a lot.. but he couldn’t contain his tears. It seems emotions are on the surface for all of us right now. He got it together and we finished the parade.

They have firefighters there that spray water to cool off the crowd of kids and parents. Jennifer used to love going that part. I regretfully have to admit I never went with her. I wanted to.. I always said next year.. Too bad I didn’t know 365 days ago would be our last 4th..

It triggered something for Jonathan too. Standing there he grabbed my legs and told me he missed sissy. I got on my knees and hugged him and cried.. ( a whole lot more than him) . But he seemed to need that moment. He asked if he could stand with me and Daddy together. . so we walked over to Tony. After a minute with us both he was recharged and then just wanted his cousin. Exactly the way it should be for a 4yr old on the 4th. 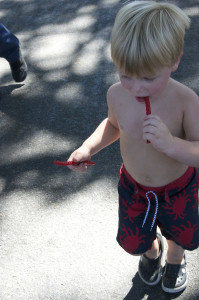 ** Took a picture to remind myself how he got 2 licorice on our walk and he saved one for his big brother.. just because he knew Jonthan would want one** 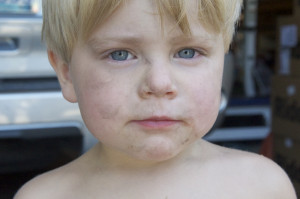 I say my brothers but actually its 2 of them, they live across the street from each other. .. So one house had a massive water slide. I couldn’t help but imagine Jennifer on it. How she would have been excited.. but then not wanted to go on it.. She would have. .maybe with a bigger cousin then she would have loved it.

Jonathan surprised us by going down early on.. he was not a fan! He came up to me holding his necklace and and talked about how she was with him. He is incredible the things he says.. and I feel so privileged I get to be the one he shares with.

Later on in the day though he went for it again.. and again.. and again.  Jennifer used to be the one that would stay with my parents (they also live in Gilroy) when we took other kids home for a rest. But today it was Jonathan. I came home and started baking like I always do… and I decided to make our dessert gluten free. Standing there baking with our 2 littlest asleep and our 2 biggest out of view.. I realized I felt like I was waiting for both of them to come home.. I had to ready myself for the door opening and only one pair of feet coming in. 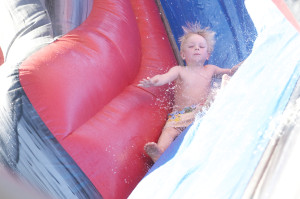 **she would have been so proud of him!**

Driving home we talked about last year .. or maybe it was the year before actually..that she was going to stay with my parents but we went back to say goodbye one last time before heading home.  And then she was torn . She couldn’t decide if she wanted to stay or come with us. She got really upset and was crying.. She ended up coming with us.. Tony said “what it if was the tumor?” Looking back now I think it was 2 yrs ago… but that doesn’t really matter .. what matters is how we always look back.. Wonder if we missed signs.. wonder what it all felt like for our 5 yr old as this killer was growing inside her head..

… wonder what could have happened if we found the tumor sooner. 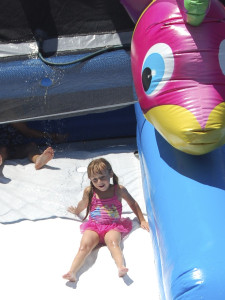 We talked with Jonathan how he had gotten his feelings hurt while we were gone.. and how he could best deal with it. Tony and I both feel so angry when he gets his feelings hurt. I can’t pinpoint it exactly. I am not sure if its because we want so desperately to be able to protect him now..  or if it brings up our feelings of failure as Jennifer’s parents. But we both feel a gut level fierceness for our kids that is so different from the way we used to be.. in the before time like I explained here. It helps in a way to know Tony is changed in this way too. Helps me not feel so strange.

We are so aware of the empty space today.. we are feeling her absence all around us. A unseen pressure from all sides..

We will have dinner and head back to San Jose to do dessert and sparklers and my sisters house. Jonathan and I made a video of Jennifer. I am hoping to post it later tonight with the help of my niece/nephews.. We wanted it to be just the 4th.. but she didn’t live enough Julys.. I didn’t take enough pictures to fill up a whole video. .  I yearn for these ten minutes when we are together to bring her back. To do more than say her name… to see her face.. her smile.. 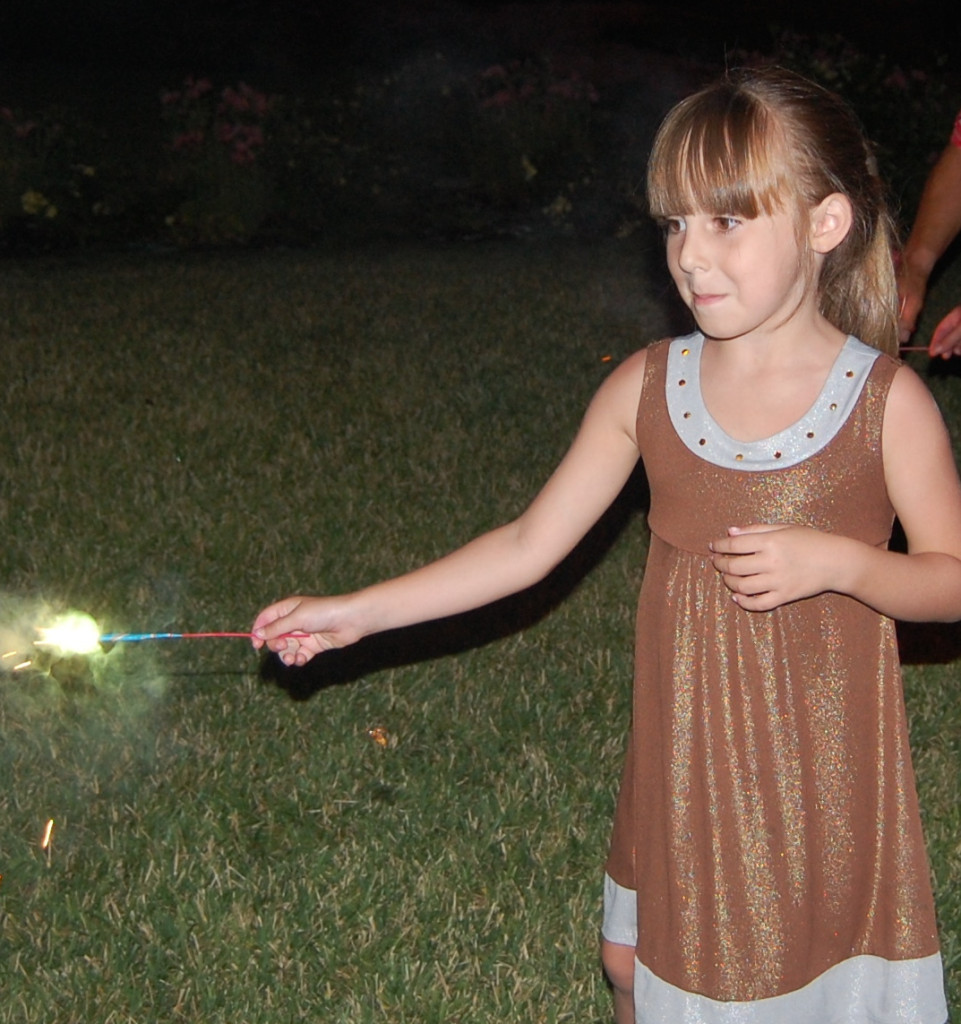